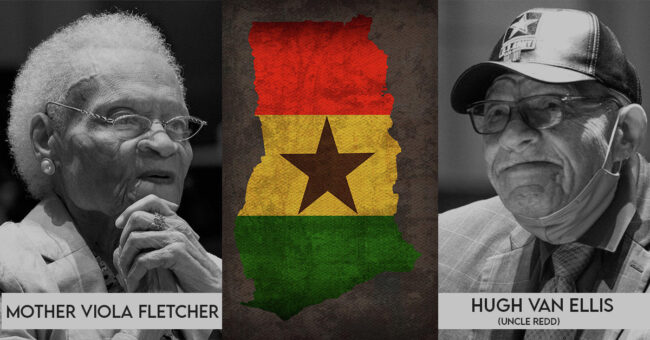 Some memories are held dearly. Some memories, when perceived are nothing but nightmares we hope to expunge from the eyes of our mind. To most in Ghana, the Tulsa race massacre is neither an episode heard of or seen but to Mother Viola Fletcher, a vile occurrence.

Memories that may never be forgotten oftentimes can be faded by beautiful ones and after 100 years, the shores of Ghana will gift her sweet and unforgettable memories.

It is the dream of every African American to one day visit the motherland and Mother Viola Fletcher and her brother, Hugh Van Ellis (Uncle Redd) who survived the destruction of Greenwood District are no exceptions.

Between 13th and 21st, August 2021, Mother Viola and Uncle Redd will have a lifelong dream fulfilled when Ghana welcomes them with open arms. This trip is sponsored by ‘Our Black Truth’, The African Communications Agency, Africa Legacy Fund and United Airlines.

Mother Fletcher and Uncle Redd will arrive in Ghana on 14th August 2021 and will be officially welcomed by the Ghana officials of the Diaspora African Forum (DAF).

Mother Fletcher and Uncle Redd will tour the City of Cape Coast, exploring the castles and dungeons where slaves were kept during the trans-Atlantic slave trade. Cape Coast is known for its role in the trans-Atlantic slave trade, being the largest slave-trading site in West Africa at the time. It will surely be an emotional experience where they will feel ‘in touch with their roots and history when they stand in the ‘Door of No Return’

As part of their tour in Ghana, Mother Fletcher and Uncle Redd will fly to Kumasi in the Ashanti Region of Ghana where they will meet the Asantehene, King of the Ashanti people in the Manhyia Palace. The Ashanti empire was known for its military prowess, wealth and natural resources; most notably, gold and cocoa. The Ashanti kingdom holds a place in history as a sub-Saharan African kingdom that was able to defeat the British in some wars. The kingdom has been studied extensively by a lot of Western historians and anthropologists due to its sophisticated political structure and vibrant culture. Being a symbol of the strength and independence of the African, Mother Fletcher and Uncle Redd will be able to connect once again with a thriving African community like Greenwood District in Tulsa was.

According to H.E. Ambassador Erieka Bennett, Head of Mission at the Diaspora Africa Forum, Mother Fletcher and Uncle Redd will place wreaths on the grave of Dr W. E. B Dubois and place names of their ancestors on the Sankofa Wall which is a memorial established in Ghana by the Diaspora Africa Forum. Mother Viola Fletcher and Uncle Redd will also be receiving gifts from a host of other African nations who is looking forward to their arrival.

Most prevailing is the narrative that Dr Kwame Nkrumah is arguably the most influential political leader Africa has produced hence, a tour to Ghana would be incomplete without visiting the Kwame Nkrumah memorial. The memorial houses the body of Dr Kwame Nkrumah and his wife, Fathia Nkrumah. Being the spot where Dr Nkrumah declared the Independence of Ghana, the mausoleum epitomizes liberation, independence and redemption.

In addition, they will be welcomed at the Jubilee House by President Nana Akuffo-Addo and his vice Dr Bawumia. Mother Fletcher’s dream to fellowship at an African Church will be fulfilled when she worships at Action Chapel International; Prayer Cathedral. We at Dominion Television hope her journey to Ghana will be a fulfilling one and create memories of joy and happiness. Mother Fletcher and Uncle Redd’s visit to Ghana will be covered exclusively by Dominion Television, Channel 352 on DStv and 168 on GoTv Ghana.