The Origin of Thanksgiving in America

“Thanksgiving began in 1621 when Native Americans sat down with a bunch of undocumented pilgrims. They had dinner and the pilgrims never left.” – Jay Leno (American television host, comedian, and writer)

The history of Thanksgiving in America is distinctive, and from the first Thanksgiving celebrated by the Pilgrims to the present, the holiday has offered people many things. Abraham Lincoln declared Thanksgiving a federal holiday in 1863, establishing the fourth Thursday of November as the holiday every year to foster racial harmony between the North and the South. Ever since the custom has expanded to include a wide range of justifications. Between the time of Abraham Lincoln and the first Thanksgiving celebrated by the Pilgrims in October 1621, however, for over 200 years, Thanksgiving in America was given a little role.

First Thanksgiving of the Pilgrims in Plymouth

In October 1621, the Pilgrims’ commander William Bradford proclaimed a three-day celebration of thanksgiving. After enduring the dreadful winter of 1620–1621, which destroyed their population and left fewer than fifty of the original 102 Mayflower passengers alive, it was to commemorate the abundant harvest of that year.

The Wampanoag Native Americans, who lived close to Plymouth and helped teach the European settlers how to produce crops in the New World, were also honored during the feast. Squanto in particular helped the Pilgrims the most and spent his entire life residing in their encampment. 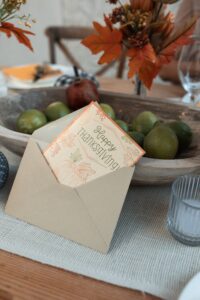 The Pilgrims and other groups of colonists held informal thanksgivings after the 1621 feast, depending on the prosperity of the crop for that year, until the 1770s when the Continental Congress proposed a national day for expressing thanks. The holiday was first declared a federal holiday by George Washington, after which it only occasionally became observed.

By the middle of the 1800s, several other states had adopted the unofficial practice of having a thanksgiving owing to an annual tradition started in New York State in 1817. Abraham Lincoln’s formal recognition of Thanksgiving Day as a national holiday in 1863, however, was the catalyst for the holiday’s eventual emergence in the United States. Since then, every president has signed an executive order declaring Thanksgiving Day to be observed annually on the fourth Thursday in November. The proclamation was made official by Congress in 1941.

Thanksgiving in America and The Turkey

The wild turkey, which is a native of northern Mexico and the eastern United States and was formerly hailed as a genuine native of North America by Benjamin Franklin, has come to represent Thanksgiving in America. Although there is no concrete proof that the bird was consumed at the Pilgrims’ first Thanksgiving, it was reportedly hunted as a staple food in Plymouth. It is unclear how it always came to be associated with the festival.

Given that it is in the male turkey’s instinct to attract and mate with females, it is larger and more colorful than the latter. The turkey’s meat is of good quality and may be prepared in a variety of ways, including deep frying, but baking is the most common. Several classic side dishes are served with the turkey throughout the holiday season, including mashed white and sweet potatoes and pumpkin pie among others.

The Macy’s Thanksgiving Day Parade, which is held in New York City and is one of many held on this day each year, is the most well-known. It contains TV personalities and numerous themed floats, with Santa Claus coming in last and formally beginning the start of the Christmas season in America. As a result, Thanksgiving in America has evolved into a profound and cherished occasion for people of all ages and backgrounds.