Over the years, God has used His servant, the Apostle of strategic prayer, Archbishop Nicholas Duncan-Williams to bless Ghanaians and several nations through conventions like IMPACT. Just like in years past, IMPACT promises to be bigger and even better this year. Resulting from the fact that God mightily uses His servants from different parts of the world to bless His people, the convention is the most anticipated of its kind. This year it runs from November 27 until December 4, with ‘Bridging The Gap’ as its theme. 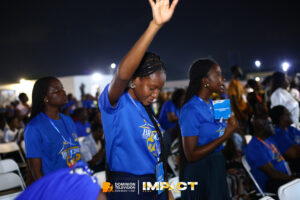 A photo of the youth in worship at IMPACT 2022.

The first day of the annual convention saw the opening of IMPACT 2022 by Archbishop Nicholas Duncan-Williams, which started with the 100 Days Global Prayer led by Prophet Prince Elisha, followed by a powerful song ministration by the Voices of Triumph (VOT) choir and MC Korku Lumor’s introduction of prominent figures in the likes of the Vice President of the Republic of Liberia, H.E Dr. Jewel Cianeh Howard Taylor, team members of Apostle Francina Norman, and team members of Bishop Gregory Toussaint, among other equally prominent leaders.

While the audience waited for Apostle Francina Norman to take the stage for the evening’s session, a series of song ministrations took place, featuring musical and choral performances. 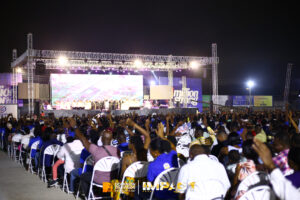 Are you anticipating God’s manifestation in this year’s IMPACT? Follow Dominion TV on all of our social media platforms to stay updated and watch the live broadcast or tune in to Dominion TV on DStv channel 352 and GOtv channel 168.